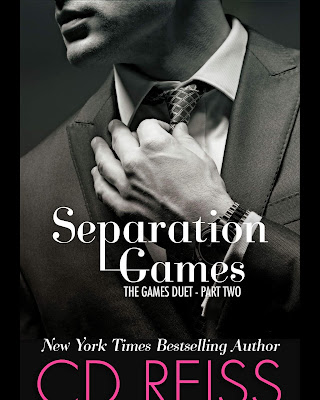 The stunning conclusion to the New York Times Bestseller.

There’s one, unbreakable rule in the game.
Stay collected. Compartmentalize. Think your next move through. Never let your heart dictate your tactics.

The heart is impulsive.
The heart makes bad decisions.
The heart doesn’t see the long game.

Because the heart may have decided to get Adam back, but when the endgame comes, the heart’s going to be the first thing to break.

He took my hand, putting it in his lap as if it was finally home. “What are we doing?” he asked.

“If you’re going to do something, I say, do it all the way.”
He squeezed my hand. I was jarred by the way he looked in the direction of the window, but not through it. He didn’t look like the commanding Dominant who had been my partner for the past few weeks. As handsome as ever, and graceful and sharp, a leader and a decider, but not the same.
He faced me. “I don’t know how to fix this.”
The streetlights glinted off the light in one eye and his jaw locked, catching things he’d never say. He looked like a man I knew and abandoned. Manhattan Adam.
“We can’t fix it,” I said, putting his hand in my lap, watching our clasped hands make a new form. I rubbed the outside of his thumb with mine, feeling it’s familiar shape, the strength of the knuckle and the texture of his skin on mine. “We have to build something new. And we can.” I looked up from our hands to his face.
Could I make him feel my optimism? Could I take a piece of it onto a fork and lift it to his lips? Would they part? Would he let me lay it on his tongue? Would he chew and swallow, saying “I do. I do believe we can, I do.”
He didn’t say that. He didn’t believe, but his lips needed to touch my belief and his tongue needed to taste my hope.
I don’t know if I kissed him or if he kissed me, but it felt like a first kiss, with full quivering that left me paralyzed at his nearness. The act of two tongues tasting each other was so intimate between strangers, so taken for granted over time, and so rarely is the wonder of it felt through to the bone.
He was licorice. Fennel and leather. And he moved like cool water, reacting to my movements, countering with his hands and his mouth, covering me with his attention. The kiss was the sway of sex, the smell of it, the carnal desire without the promise of anything but another dance.

"The journey of a thousand miles starts with a single step.
After the first step, you still have to walk the thousand miles."
And that's a perfect way to describe a communion of souls. With a wedding you took the first step and there's a long long way ahead on this beautiful path of discovering each other while unraveling yourself to the other.
Adam and Diana are walking perpendicular to each other .the ultimate cross at the Intersection Of Interest sand yet they can't seem to find a parallel or the Congruence. Their struggle...or rather Diana's struggle is very raw here. She's awakened yet unfulfilled

"He’d asked me to love him when what awakened my love was the very thing that killed his love. There was no path to reconciliation.I was nothing. Nowhere, in the middle of a jump from one world to the next, midair, legs pumping at nothing above the chasm of in-between-ness. Neither-nor-ness. A yawning gape of indecision. A life without an identity."

The chasm between them gets deeper and deeper to the point that it swallows them whole, their love, their personalities, their dignity.
Yes , their dignity. Diana is forced to lose her morals and she gains nothing back.

"Success or failure, I had to find out who I was. I still had to understand what my submissiveness meant. How deep it went. How it could complement or destroy my life."

I could write and write about the beautiful spirit that lives in this story, but I'd like you to discover it for yourself.
There's too many things in this story to take home with you. Each will find their closure or perspective, depending upon your life.
Christine should've been a therapist to carefully turn the leaves of their marriage pages., like an old testament. The pages and the book has always been here but Christine shines a new light on them.
Maybe a slim flashlight with loop in the hidden compartment .;) <-- b="" hawt="" scene="" soooooo="" that="" was="">
I love how Reiss writes the words...linking random things to the turmoil or epiphany within

"The cross made the urine holy !! (What an eye opener )
Like a checkerboard that you always assumed was black on white, but once you saw the possibility that it could be white on black, you couldn’t unsee it. The mind goes back and forth with the opposites, melding them into an agreement of inverses."

I fell in love with the characters and their interaction. Beautiful story...like a hot knisch.....I don't like cold potatos either :)
at January 09, 2017